From Shami to Sensei – The legacy of the Godolphin Arabian. 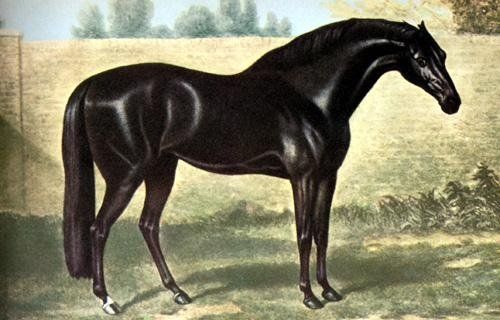 From the late 1600’s and into the early 1700’s three stallions emerged as founders of today’s modern thoroughbred breed as we know it, these being The Darley Arabian, The Byerley Turk and The Godolphin Arabian.

Over the past 185 years The Darley Arabian has far outstripped the other two in numbers to the point where today it is estimated that over 95% of modern thoroughbreds including the likes of Northern Dancer and Mr Prospector trace through Eclipse to The Darley Arabian.

But it is The Godolphin Arabian (sometimes referred to also as The Godolphin Barb) that we want to take a little closer look at here as he is the paternal founding ancestor of the recently announced new Queensland based stallion Sensei, a son of Dream Ahead.

There is a very strong possibility that Sensei could be the only stallion of The Godolphin Arabian lineage standing at Stud in Australasia in 2021 so he has a lot resting on his powerful shoulders.

There is considerable conjecture that The Godolphin Arabian was born in Yemen in 1724 and exported to Tunisia on the Barbary Coast of North Africa at an early date where he quickly became part of a five-horse package offered as a diplomatic gift in 1730 to Louis XV, King of France, from the Bey of Tunis. He was known in France as Shami but was not tried as a stallion after arriving in poor condition from North Africa.

After being in France a few short years he was on-sold to Englishman Edward Coke, the Duke of Devonshire, but Coke’s premature death saw the stallion end up with Francis Godolphin, the 2nd Earl of Godolphin, hence the derivation of his name The Arabian Godolphin to replace Shami.

Physically, The Godolphin Arabian was described as a relatively small horse barely 15.0 hands and a brown bay with a dished profile confirming the general consensus in Europe that he was an Arab rather than a Barb. He was described as “of incomparable beauty”, carrying his tail in true Arabian style and with an unnaturally high arched crest and with a white off hind foot and a little white on the inside corner of his near hind foot. He also had a relatively small head with large ears but heavy shoulders.

His influence at Stud in England was instant from his very first foal with his early progeny possessing great speed. In his 22 years at Stud, The Godolphin Arabian sired close to 100 foals and was the Champion Sire in 1738, 1745 and 1747.

Lath was unbeaten on the racetrack and the best horse seen at Newmarket since Flying Childers. Full-brother Cade was a winner of the King’s Plate at Newmarket.

Three sons of The Godolphin Arabian were to dominate the English Sires Premiership for almost 20 years, Cade 5 times, Regulus 8 times and Blank 3 times.

It was, however, Cade’s son Matchem (1748) who was to perpetuate the sire line, himself winning 8 races and later winning the Sires Premiership three consecutive seasons from 1772.

The Godolphin Arabian died on Christmas Day 1753 at the age of 29.

It is said that he never left a chestnut foal, everything being bay except for a few greys from grey mares.

In North America in recent times The Godolphin Arabian has held his hat on the deeds of dual Breeders Cup Classic winner Tiznow (his photograph strikes a remarkable resemblance to that of Sensei – is this the true stamp of The Godolphin Arabian still at work?) but that stallion’s recent “pensioning off” has left a mad scramble to find a successor/s for this vital outcross line.

In Europe, the main surviving arm of The Godolphin Arabian sire line has continued through 2000 Guineas winner Known Fact and his son the champion miler Warning.

It is this line that has produced outstanding sprinters such as Diktat (Haydock Sprint Cup), Avonbridge (Prix de l’Abbaye de Longchamp ) and Dream Ahead ( July Cup ).

The Derby has not been won by a sire line descendant of The Godolphin Arabian since Santa Claus in 1964, an event nowadays dominated by descendants of the Darley Arabian.

It should not be forgotten though that Eclipse, although tracing to The Darley Arabian in his sire line, is out of a mare by Regulus thus tracing also in part to The Godolphin Arabian. When it comes to comparing these three incomparable stallions, The Godolphin Arabian, The Darley Arabian, and The Byerley Turk, it’s an impossible call to make. Each bestowed something very special, with the three lines finally coming together to create the greatest athlete of them all: the modern Thoroughbred. There is no greater legacy than that.

Today, The Godolphin Arabian is more heavily represented in dam lines and in the “middle” of pedigrees rather than through direct sire lines but a sire of the potential quality of Sensei who appears to carry the traits and attributes so typical of his sire line going right back to his foundation sire just may be able to keep the legacy of The Godolphin Arabian flickering just that little longer in Australia as welcome outcross bloodlines.